The U.S. Navy’s Knifefish, an unmanned undersea vehicle designed to modernize the Navy’s mine-hunting capability, is one step closer to reality after completing a comprehensive risk reduction program.

General Dynamics Advanced Information Systems, the company behind the Knifefish, says the tests were designed to uncover potential defects early in the program’s development phase to prevent delays and cost overruns later. The Knifefish successfully completed a critical design review earlier this year. 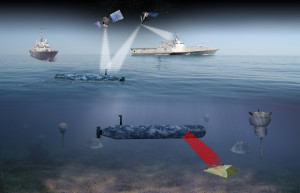 The autonomous, torpedo-shaped robot is scheduled to begin operations in 2017 as a part of the Navy’s Littoral Combat Ship mine countermeasure mission package, which includes a variety of complementary mine warfare platforms. The Knifefish system will include two UUVs that will operate as off-board sensors to allow their host ship to stay clear of danger. Its primary purpose is to gather large amounts of environmental data to provide intelligence for the ship and other mine warfare systems.

Unmanned aerial vehicles tend to garner more headlines, but their underwater counterparts are a key part of the U.S. military’s strategy going forward and are featured prominently in its Unmanned Systems Integrated Roadmap FY2011-2036, often working in conjunction with UAVs. They are also increasingly being used in research — in fact, Bluefin reported in January that it will produce a variation of the Knifefish for the Naval Research Laboratory.