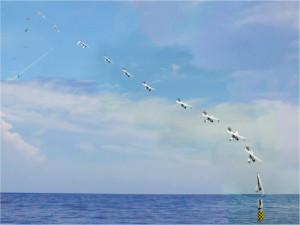 According to the caption of the launch photo (at right), the test took place back in August, which the Naval Research Laboratory says was less than six years from original concept to fleet demonstration.

In the photo, you can see how the XFC rose to the ocean surface looking like a buoy. The submarine’s commanding officer then gave the word, and the XFC launched and flew for several hours, streaming live video to Providence, surface support vessels and Norfolk before landing at the Naval Sea Systems Command Atlantic Undersea Test and Evaluation Center in Andros, Bahamas.

According to the Naval Research Laboratory:

The XFC is a fully autonomous, all electric fuel cell powered folding wing UAS with an endurance of greater than six hours. The non-hybridized power plant supports the propulsion system and payload for a flight endurance that enables relatively low cost, low altitude, ISR missions. The XFC UAS uses an electrically assisted take off system which lifts the plane vertically out of its container and therefore, enables a very small footprint launch such as from a pickup truck or small surface vessel.”

The project used funding from SwampWorks at the Office of Naval Research and the Department of Defense Rapid Reaction Technology Office.