Double Robotics, which makes a $2,500 “wheels for your iPad” telepresence solution called the Double, recently reported via its blog that it has added a new control option for the device: The iPhone.

Previously, users were able to drive the Double using an iPad or the Chrome Web browser, remotely steering the device, adjusting its height, parking, controlling volume levels, etc. The company’s latest app makes it possible to beam into the robot on the go using the iPhone. 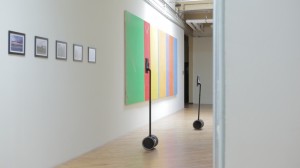 “Many of our users wanted the ability to drive Double from their iPhone and we couldn’t agree more. We believe that driving your Double from an iPhone provides even more flexibility and mobility,” David Cann, CEO of Double Robotics, said in the post. “You may not be in front of a computer or with your iPad, but you most likely always have your iPhone on hand.”

All functions are available from the iPhone driving interface, and though it’s obviously smaller, it otherwise functions similarly to its larger counterparts. The company reports that in addition to using Wi-Fi, users can drive over a decent 4G or LTE connection with the iPhone.

Cann told The Business of Robotics that the system should be compatible with new iPhone 5c and iPhone 5s models, which will be available Friday, although of course Apple hasn’t granted any early devices to test yet. He also said the company has a version of its app in the review process with Apple’s App Store that is compatible with the latest iPhone operating system, iOS 7, which was released today. Cann expects the new app to be approved soon.

Double users will still need an iPad to mount on the actual robot (as seen in the photo above). The Double is intended for use in offices, schools, retail stores, manufacturing facilities, museums and anywhere else users want to be present without the need to physically travel. See below for a video of the device in action.