On April 1, 2012, plans were first announced for the DARPA Robotics Challenge, and after more than a year of anticipation, the robot competitors will finally be put through their paces starting tomorrow.

The two-day event, which takes place Dec. 20-21 at the Homestead-Miami Speedway in Homestead, Fla., is actually the second stage of the DRC, but it’s the first to involve actual robots. Back in June, the Virtual Robotics Challenge tested teams on their ability to program a simulated robot, with the winners moving on to this week’s competition: The DRC Trials.

There are actually several groups competing at the DRC Trials. The teams that made it through the Virtual Robotics Challenge received an Atlas robot from Boston Dynamics (the same company that Google recently purchased) and will compete using that as their platform. Another set of teams designed their own robots with funding support from DARPA, including groups from NASA, Carnegie Mellon University and others. Finally, a group of four self-funded teams also qualified to compete. 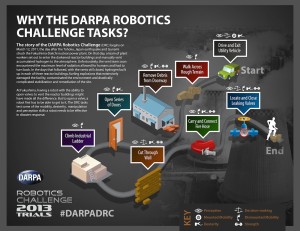 Each group will face the same eight tasks, which are designed to test their ability to respond in the event of an incident like the one that inspired the competition, the Fukushima Daiichi nuclear disaster.

DARPA will give the robots 30 minutes to perform each task, fully expecting that not everyone will finish every task. To determine the robots’ ability to act semi-autonomously, communications speeds between the robot and its operator will be deliberately varied — and teams have been told to expect other curveballs along the way.

The tasks, as described by DARPA, are as follows:

Drive and Exit Utility Vehicle: The hardest single task and the one that requires the most robot-human interaction. The operators must direct the robots to drive the vehicle safely despite occasional communications disruptions. Getting out of the driver’s seat poses significant strength and dexterity challenges for the robots.

Walk Across Rough Terrain: The robots must maintain their balance and identify safe routes for placement of limbs.

Remove Debris from Doorway: Robots must demonstrate a wide range of motion, in addition to balance and strength, to clear a path forward.

Open Series of Doors: Moving the doors in an arc challenges the robots’ perception and dexterity. The robots must figure out how to align and move themselves as they open each door.

Climb Industrial Ladder: To avoid falls, the robots must safely navigate the ladder and maintain their balance as they climb. Strength is required to stop a fall.

Cut Through Wall: Using power tools tests the robots’ strength, dexterity and ability to perceive their environment.  The robots must also simultaneously apply rigid force to hold a tool, yet demonstrate the flexibility to smoothly manipulate it.

Locate and Close Leaking Valves: The robots must identify the valves, determine which ones are open and have sufficient range of motion to turn the valve wheels in an arc to close them.

Following the DRC Trials, up to eight teams may continue to receive funding to prepare for the DRC Finals, which are scheduled for December 2014.

“We know the robots are slow and unsteady at this point — they’re much like a one-year-old human in terms of locomotion and grasping abilities and much farther behind that in brainpower,” Gill Pratt, DARPA program manager, said in a statement. “The robots are taking ‘baby steps’ this year, but their performance will establish a reference point for what we can expect from the teams that return next year for the DRC Finals. We want that event to be much more difficult and force the robots to demonstrate useful capabilities in realistic disaster scenarios.”

For complete details on the competition, go to theroboticschallenge.org.